On a cool, humid and windless day, my connecting flight from Anchorage likely wouldn't offer many amenities. After wandering around the airport, I found my gate and flight, a little Bearhawk with some 100 mph tape stuck to the wing and more scattered on the tail rudder. Inside, first class seating was held together by more duct tape with rolls of the life line sitting in the back seat. My pilot - Rob - welcomed all passengers aboard Flight-7 to Donlin Creek by announcing the flight was not full, so we were welcome to spread out. Where? I wondered. This old plane only had four seats and one occupied by the bush pilot.
After the pilot announced our flight time would be about 1 hour and 45 minutes, I asked about the rest room? "If it comes to that, just hang it out the door. But remember, the cockpit forms a low pressure zone that will suck much of the waste back inside". So, no toilet, no movie, no peanuts, no coffee and no first class, but this is what I expected and I was greatly excited - this was my first trip to Alaska. It was 1988.
Back when Alaska was still part of the Russian Empire, explorers reported finding gold within stream gravels of Kenai River of southern Alaska in 1848.
But by 1869, the first commercial gold cache was found in gravel at Windham and Sumdum Bays near the future site of Juneau, and within a year, the first attempt to mine lode gold occurred (1870) near the present site of Sitka (75-miles west of Juneau) near Sitka Sound. Nine years later (1879), n
uggets were found near the head of Gold Creek, southeast of  Juneau.
Extensive copper mineralization was identified on the Prince of Wales Island (150-miles southeast of Sitka). These were noted, but because of extreme remoteness, they sat unexplored for years. Then in 1898, rich gold placers were discovered in the Seward Peninsula in western Alaska at Nome. This led to a gold rush, and thousands of prospectors headed to Nome. Four years later (1902), the next gold rush sent prospectors  to the Fairbanks region inland.
Placers in Alaska are widespread, found in nearly every major river system and beach sands at Nome, Kodiak Island, Yakataga, Lituya Bay and the Cook Inlet. Since 1988, two major lode-gold discoveries were made at Donlin Creek and Pebble. These could result in world-class lode mines. 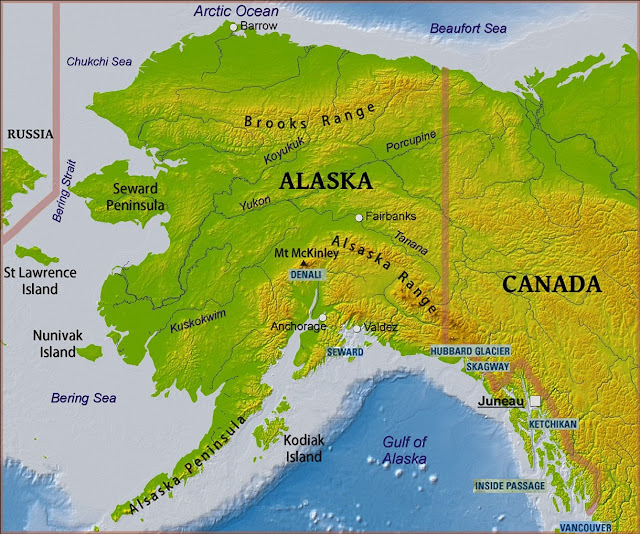 Lode mineralization is associated with Mesozoic felsic plutons (granite, granodiorite) and volcanic rocks intruded in Precambrian and Phanerozoic age rocks in Alaska. The precious metal  has also been found throughout much of Alaska except vast uninhabitable swamps of the Yukon Flats and on the North Slope of the Arctic between the Brooks Range and the Beaufort Sea. In the vast central uplands and plains and in the Pacific Mountains to the south, numerous gold, silver and massive sulfide deposits are found. The central uplands and plains between the Brooks Range to the north and the Pacific Mountains to the south is a vast region of alluvial lowlands and eroded plateaus known for placer gold such as Seward, Koyukuk, Yukon and Kuskokwim uplands and peninsulas that overlook the broad flat plains of the Yukon River.
In the Copper River region of the Pacific Range to the south, the bedrock is formed of Late Paleozoic to Quaternary graywacke, slate, and greenstone with lesser carbonates. Felsic (granite, granodiorite) and mafic (dunite, quartz diorite) intrusives invaded the basement terrain during late Mesozoic to early Tertiary. Mineralization includes copper, gold, silver, molybdenum, antimony, nickel, chromite, lead and zinc. Mines, such as the Kennecott copper operation near McCarthy in the Nizina district and in the southwestern and northeastern parts of Prince William Sound accounted for much of the copper produced in Alaska.
From 1869 to 2018, Alaska produced more than 48-million troy ounces of gold. Future exploration should focus on areas containing gold placers and examine the morphology of the gold grains, and then search for nearby source lode(s). For instance, rough gold having texture of corn flakes with rough edges, along with fragile nuggets and/or large nuggets, suggest a nearby lode source. Other types of gold deposits of interest will be polymetallic massive sulfide deposits, porphyry copper deposits, and replacement deposits. Being that Alaska is covered with large regions of marsh  and swamps, there will be many new discoveries in the future. 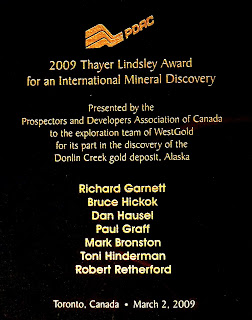 Two drainages that empty into the Kotzebue Sound of the Bering Sea, include Noatak River and Kobuk River. These rivers define the locations of the Kiana, Shungnak, Noatak, and Selawick districts. The Noatak district is now within the Noatak National Preserve.
Brooks Range district
The Red Dog mine ( 68° 4'34"N; 162°51'5"W) in northwestern Alaska, lies at the western extent of the Brooks Range, to the east of Kavilina. This world-class zinc-lead open pit mine (world's largest producer of zinc) mines considerable sphalerite (zinc-sulfide) with significant amounts of galena (lead-sulfide) and millions of ounces of silver. The deposit is classified as a stratiform Zn-Pb-Ag, sediment hosted, massive-sulfide deposit hosted by Carbonfierous black shale and altered carbonates.
Chandalar mining district
The Chandalar district is the area around the upper drainage of the Chandalar River, includes some southern foothills of the Brooks Range, and extends to the crest of the Brooks Range. Discovery of placer gold in 1906 was quickly followed by lode discoveries. Most of the placer-producing creeks drain the area of lode mineralization. The district produced about 48,000 ounces of placer gold and 17,000 ounces of lode gold.
Little Squaw Creek drains an area cut by many auriferous veins. Some of the placers in the basin are exceptionally rich. By 1916 most of the shallow placers were playing out so miners shifted their interest to the placer drift mines. The most notable of these is the Little Squaw Bench, including the Mellow Bench. Approximately 29,000 ounces of gold were recovered averaging 1.0 oz/cubic yard of gold in the gravels with spikes of up to 4.6 oz/cubic yard. Some individual nuggets were over 10 ounces. In 2010, gold production resumed with mining of the placer deposits.
In 1909 to 1915 development and underground gold mining occurred at the Little Squaw, with a few hundred feet of workings built and a few dozen ounces of gold recovered. The nearby Mikado mine enjoyed similar efforts around 1913. In the 1960s, 1970s and 1980s additional work was done. These later efforts probably recovered more than 10,000 ounces of gold. Significant efforts resumed in 2006, and are ongoing, to explore the Little Squaw placer and lode deposits.